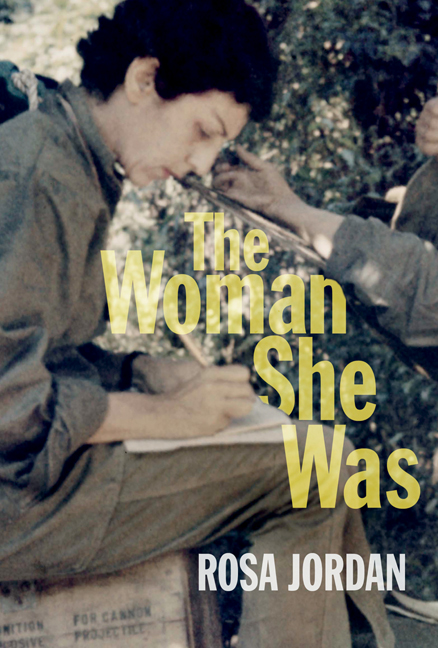 WHO IS THIS WOMAN AND WHY IS SHE
ON THE COVER OF THE WOMAN SHE WAS?

The woman is Celia Sánchez. The hand in the background belongs to Fidel Castro. Had his image not been cropped out, our eyes would have slid past her unfamiliar face to Castro’s familiar one. Journalists and historians have done the same. For 50 years most have focussed on the “guerrilla prince,” barely noticing the woman who actually ran the Cuban revolution and was central to its success.

The Woman She Was is not about Celia Sánchez. It’s about a doctor in modern who was named for her, and who in trying to untangle the complexities of her work life and love life begins to imagine that she is Sánchez. Or rather, tries to not imagine that she is Celia Sánchez. As a pediatrician with no taste for the paranormal, she views her hallucinations as mental aberrations that might lead somewhere she doesn’t want to go. Because the story only gives glimpses of Sánchez as imagined by the protagonist, here are things that might interest you about this woman we non-Cubans know so little about.

Celia Sánchez, a native of eastern , was working to undermine the dictatorship while Fidel, six years younger, was still in law school. Later, when he did attempt an armed uprising, he was rapidly apprehended. He might have spent the next 15 years in prison had Sánchez not organized island-wide protests demanding his release. Batista capitulated to public pressure. Fidel went free, moved to to regroup, then returned for another attempt at overthrowing Batista. Sánchez, who had communicated with Castro but never met him, was waiting with trucks to transport him and his 81 men to safety. But they got lost, not making landfall till two days later and in the wrong place. Three days after that Batista’s soldiers caught them and disaster ensued.

Celia’s friends rescued the 16 survivors. Despite Fidel’s record of two disastrous military engagements, she convinced her co-conspirators that he should command the rebel army—fighters she and her people would have to recruit since most of his had been killed. She also took charge of strategy, organization, finances, community relations, and about everything else essential to a successful guerrilla war.

Batista knew her importance to the insurgency and put a $75,000 bounty on her head. Che Guevara, commenting in his diary on a false report that Sánchez had been captured, wrote, “Celia was our [the guerrillas] only known safe contact…her detention would have meant isolation for us.”

The CIA reported, “Celia Sanchez is one of the most powerful figures in the 26th of July Movement. All functions not strictly military are under her jurisdiction. All intelligence agents report to her.”
Back