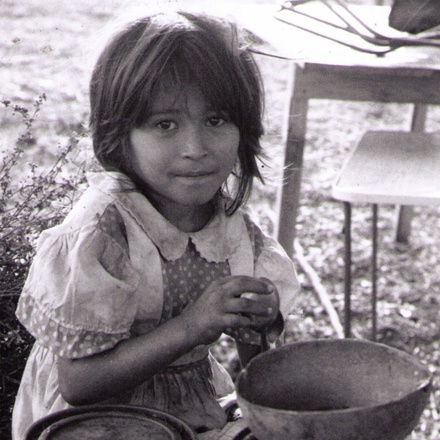 The children of Ciudad Romero have moved four times in the past six months. In November they moved by boat and by foot from a refugee camp in the jungle to Panama City. There they camped on the street outside the Salvadoran embassy for two months, while their parents negotiated with the Salvadoran government the right to return to their own country.

One of the children who made the move wrote to a child in Malibu, “The trip was very difficult. We were four days with the bother of having nothing to eat.”

At the end of January the Salvadoran government finally agreed to let the refugees return to El Salvador, but only on condition that they settle in a military-approved refugee camp.

The teenagers, old enough to remember life in El Salvador before the war had driven them out, had hoped that they would be able to go back to their old home at La Union. Or better yet, to a location on the coast where their parents could form a fishing cooperative and they could enjoy El Salvador’s beautiful black sand beaches.

Finding themselves back in El Salvador but on a high dry plateau of blazing sun and blowing dust was not, to them, “coming home.” One boy named Alberto told me, “I dreamed of coming back since I was five years old, but this place with no trees, it was not what I dreamed. It was not my country.”

The adults must have felt much the same, immediately realizing that there was no livelihood for themselves or future for their children to be had here. It took them ten weeks to find another place, but as soon as some abandoned land was discovered, adequate for a camp of over 600 people, they took their depressed teenagers and coughing babies, and without alerting the military, quietly moved there.

Meanwhile, the directors of the community were working to obtain title to a 300-acre farm where they could do more than camp; where they could stay, plant crops, and build a town. The delegation from Malibu arrived as the people of Ciudad Romero were in the process of this fourth—and they hoped, final—move. We reached the farm at dusk, literally behind the last truckload. 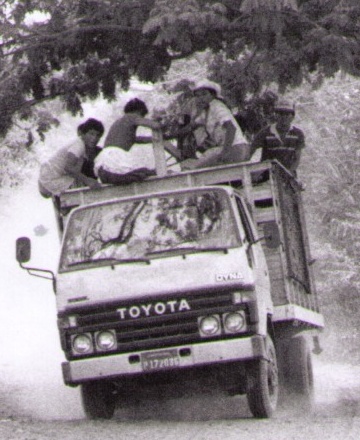 I was awake most of the night, lying in my tent or sitting outside in the starlight, marveling at the calm. There were, I knew, over 300 children in this camp. Not until near dawn did I hear one cry. Like their parents, they were tired, and glad to be here.

By sunrise they were up, and children as young as six were on their way to the river for water. And there were other chores: collecting sticks from the surrounding bush to keep cooking fires going, grinding corn for tortillas, looking after younger siblings, carrying laundry to the river to be washed.

Scores of Malibu children had sent letters and gifts to the children of Ciudad Romero. We had planned to distribute them at school, but children who have moved four times in the past six months, most recently the day before, do not attend school.

We sought out the community’s youth director and explained about the letters and gifts. He passed the word around, and on Saturday morning about 50 children came, dressed as if for school, and sat on hard wooden benches under a canvas awning to receive their mail.

Among the gifts sent from Maliu children were school supplies: pens, pencils, crayons, paper. When these had been distributed, the children laid their tablets in their laps and wrote back.

Letters from the children of Ciudad Romero, like those they had received from students in Malibu, were brief and decorated with drawings. The most common image was that of a home, some sketching a picture of the tent they now lived in, some drawing the house they would like to have. One boy drew a simple outline of a house with no details except, on one side, a large water faucet.

The second favorite image was that of a truck which the community had just purchased and which is its only vehicle.

The third most common image to appear in the letters from the children of Ciudad Romero was that of a helicopter. One child, whose page was filled with small drawings, had labeled each thing: Mother. Dog. Duck. Tent. And hovering above the mother, the dog, the duck, the tent, was a helicopter which he had labeled: WAR. 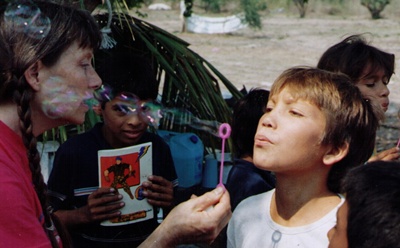 Later Malibu visitors would see the frightened faces of children looking up at a camouflage-painted Huey helicopter as it circled low over the camp, guns protruding. But that day there were no helicopters over Ciudad Romero.

We collected the letters children had written to take back to Malibu, and distributed gifts sent by the children from Malibu. We put pretty hair ties on the girls’ ponytails, blew bubbles, and kicked the soccer balls around. It was the happiest day of our visit. One thing more we might have wished was that the children of Malibu could have been here, too, enjoying this day of fun and peace that their sharing had created.