Visually, the Argentine pampa is a lot like the American Middle West. Apart from the province of Buenos Aires, where the occasional pink flamingo mingles with cattle in rain-soaked fields, the land and sky seem empty for mile after interminable mile. But travel is comfortable because the bus is a Mercedes, staffed by smiling stewardesses who constantly offer pillows, blankets, snacks, and “café, te, o whiskee?”

Entering the province of San Luis, the bus passes under an arch decorated with a picture of a gaucho (cowboy) on horseback trampling an Indian underfoot. However, it had taken some centuries for the gauchos to accomplish this. It is said that when the conquistadors first came to claim the pampas, the Indians ate them.

I was making this trip in September 1973, and it was meant to be a skiing vacation in Chile. But when we arrived in Santiago, we had found closed shops, gasoline stations guarded by men with machine guns, a scarcity of food, and truck drivers on strike. A taxi driver told us that with US dollars he could get enough gasoline to take us to the ski area of Portillo; from there, he advised us, we should go on over the Andes to Argentina.

Outside Santiago we passed trucks parked in the fields, circled in caravans. The taxi driver slowed and we saw the festive atmosphere: steaks being barbecued, wine flowing. No shortages here. “They used to work for Chile,” said the driver. “Now they work for the CIA.”

Some progressive Americans must have known what was happening in Chile when it was happening, but I didn’t. My companion and I were still focused on Southeast Asia and knew only that a Marxist president had been elected in Chile. We were interested to see how his brand of socialism would work out in the context of their democracy, but for the most part our attention was elsewhere. The Vietnam war was still on. The Watergate affair was unfolding. This trip had been motivated in part by a need to escape the barrage of political insanities emanating from Washington. 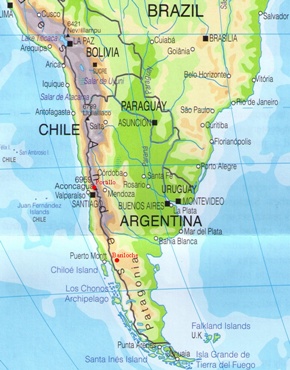 Portillo’s snow-covered slopes were unparalleled for scenic beauty and skiing those spring days. I would have loved to stay longer, soaking up its physical magnificence and air of isolation. But the once-a-day train was no longer bringing food. A coup, they said over fruit juice in the bar (there was nothing else to drink), was imminent. So we took the train to Argentina. After a few days on a ranch outside Buenos Aires, we headed for San Carlos de Bariloche to ski the Argentine side of the Andes.

The bus driver made an announcement I didn’t completely understand. We were discussing it when an Argentine woman across the aisle addressed us in English. “He said that dinner will be served at the next stop. It is included in your fare.”

I fell into conversation with the woman, whose name was Maria Elena. She was also going to San Carlos de Bariloche, but not to ski. She was an atomic physicist; there was a research center there, she said, where she and her husband worked. She asked where else we had traveled. We said we had been in Chile and told her how things were.

She looked angry, frustrated. “It was so important to us to have a model of social justice without revolution! We were hoping Allende could make it.”

“Are you certain he will lose the next election?” I asked.

“But you were there. You saw how the CIA has undermined him!” Her low-piched voice shook. “Allende will be dead within a week.”

I was swept by a sudden sense of shame. Back home I counted myself part of an articulate, educated, politically-savvy elite. Yet here was a woman on a bus in the middle of nowhere looking at me as if I were hopelessly (or deliberately) ignorant. What did she think of the callousness of an American who had chosen to go on a ski trip in a country where the United States was engaged in the overthrow of a 187-year-old democracy?

I closed my eyes and let the big Mercedes bus lull me to sleep.

By morning we had reached the edge of the pampas and were climbing into the mountains. At last we reached Bariloche, an alpine village perched on the edge of a lake, and climbed out, stiff-jointed from two days on the bus.

Maria Elena’s husband was there to meet her. She wrote down their address and invited us to visit, but her husband’s eyes were cold. “Americans?” he said, in a way that made me feel that he saw me as I had been seeing myself: a tourist from a bullying nation, either callously indifferent or incredibly ignorant.

“Thank you,” I said to Maria Elena, too embarrassed to accept the hospitality she offered.

We skied the snows of Bariloche in t-shirt-warm, September spring sunshine. Below us lay deep, dazzling Lake Nahuel Huapi, in the center of which is a forested island where the book Bambi was written. Evenings we spent walking the streets of Bariloche, a village as Swiss as the Swiss who had settled it, all wooden chalets and shops selling chocolates and handmade sweaters. There was only the flow of Spanish to remind us that this was Argentina.

Then it rained and that was the end of skiing. In the evening we caught another Mercedes bus, northeast and back into the pampas.

I woke up when we stopped in a small town—an Indian reservation, judging by the faces and the poverty. There was, incongruously, a larger-than-life statue of John F. Kennedy.

A boy came onto the bus selling newspapers. He looked at the round-faced man across the aisle, and then at me, and said, “Salvador esta muerto.”

Because I was sleepy, and because “salvador” translates as “savior,” I didn’t quite understand. “The Savior is dead?” I repeated in halting Spanish.

The round-faced man, whose features I had come to associate with Chileans more than Argentines, looked directly at me, dark eyes wide, not blinking as a wash of tears spilled over.

“Yes,” the boy said in Spanish. “The soldiers, or the Americans—they have killed him.”