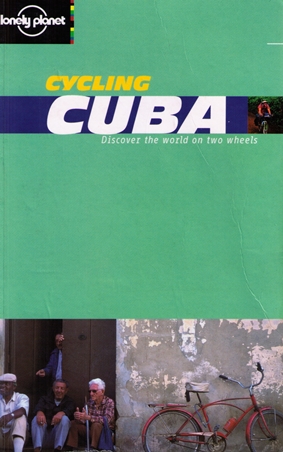 Hundreds of miles of lightly-trafficked highways skirt Cuba’s 3,000-mile-long coast. Hundreds more miles of paved and unpaved roads cut through the island’s four mountain ranges–and all through a culture unlike any other on earth. While the US government has conspired to prevent its citizens from discovering what Cuba is really like, Cuba’s government and its people display an openness that makes this one of the most interesting places on the planet to explore by bike.

Cycling Cuba, produced by Lonely Planet in January 2002, was the first cycling guide to the largest island in the Caribbean. Later in 2002, a US publisher also brought out a guide to biking in Cuba. These remain the only two Cuba cycling guides that have been published to date.

Cycling Cuba steers riders along 42 of Cuba’s best cycling routes, and offers a wealth of suggestions for making the journey a smooth and exciting experience. Cyclists will be seduced by the vibrant Latin culture, amazing scenery and lush tropical beaches of this island country.

Climb the weirdest mountains this side of China, see ancient cave paintings on a pristine beach, or do a day trip on Havana's historic boulevard. Find out where to stay from campismos to private homes to beach resorts; where to eat–dining out and pannier fillers for every budget; maintenance tips, plus how to pack and transport your bike; and what to see and do in and out of the saddle.

Cycling Cuba is now out of print, but can still be purchased from various .com book sellers.

Interview by Darren Davidson from the West Kootenay Weekender (Jan 22, 1999)

The life of Rossland’s Rosa Jordan is as much about hope as it is despair. She has witnessed the ugliest human behavior in some of the world’s most beautiful countries, watched devastation cripple already-destitute people, and even escaped the planet’s most dangerous place – a place she once called home.

At 59 years old, Jordan is an accomplished journalist, author, screenplay writer, and activist. In 1997, she published Dangerous Places, an account of her 20 years as a freelance journalist pursuing truths in the socio-political chaos of nations throughout Latin America. From civil war in Guatemala and El Salvador, ferocious earthquakes in Bolivia, a rat-infested jail cell in Ecuador, part autobiographical, the book sounds more like make-believe fodder for an Indiana Jones novel than a true-life account of two decades’ work.

“The thing that captured me about travel, besides the adventure, is that it pushes me past my own imagination, so that it becomes an educational experience beyond every other,” she says.

Jordan’s entire life has been a trip. Raised in Florida, she was a 15-year-old high school dropout who went on to graduate from UCLA in 1970, then to grad school in Mexico. She remembers the first day she drove into view of Rossland’s Red Mountain, part of a North America-wide search for a ski town “with more time” than the quickly-developing resorts elsewhere.

“The day I drove in I knew this was it. I bought a house the next morning.”

That was in 1974. Since then she has split her time between home in Rossland with her husband Derek, a writing studio in Malibu, California, and travel.

In 1998, the Showtime Network aired The Sweetest Gift, a movie for which she wrote the screenplay.

Jordan is currently juggling three hefty projects – development of a small jungle cat reserve in Ecuador, social justice programs for Earthways Foundation of Malibu, California, and a book about cycling in Cuba.

Jordan spoke to The Weekender three days before she and her mountain bike departed for Havana.